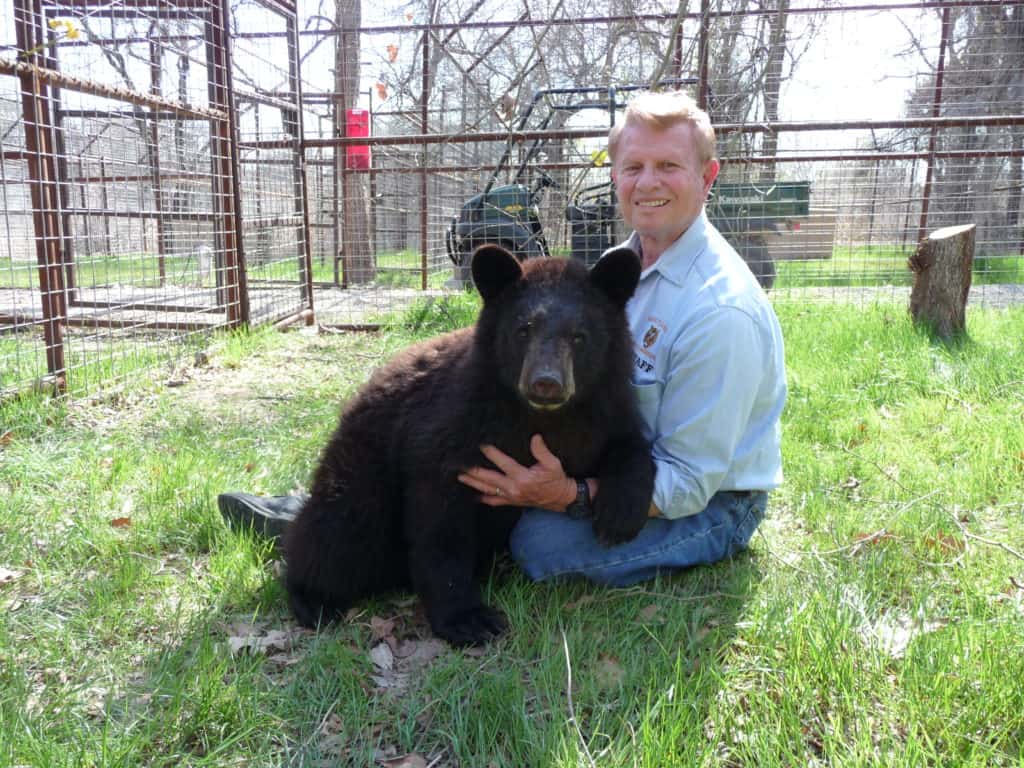 Perhaps no other animal native to North America raises more interest and confusion than bears. Especially black bears, since they are so much more widely spread and located than are the grizzly bears of the Northwest and Alaska.

Because of increasing numbers of human/bear conflicts taking place in states across the country in which bears live, the International Exotic Animal Sanctuary made the decision in 2007 to take in both black bears and grizzly bears that needed homes.

At the International Exotic Animal Sanctuary, we had both black bears and grizzly bears. I worked with the black bear cubs, which were received by us when their mother was killed by a Game and Fish Department when found in a residential area in the Northwest.

We received these cubs when they were about 8 months old, and they were at first very fearful of humans, having seen their mother shot and then kept in a strange and noisy place for a month.

After working with them for long periods of time, I begun to earn their trust and confidence. They now are beginning to look upon me as a comfortable companion that shares their dinner table and is quite helpful in opening their peanuts for them, holding their carrots while they eat them, and holding their apples to make eating them much easier.

They are beginning to accept and enjoy affection, rubbing, and gentle stroking. They also play with my clothing in a very gentle but curious way, wanting to check each item out and see its texture and taste.

I do everything possible to be a calm influence, never reprimanding them beyond a gentle no when they get a bit exuberant, and lying in close proximity so that they realize I trust them. My trust in them creates trust in me on their part.

The bears have now grown older and are in their much larger 5 acre habitat. We take walks in the woods and share a more natural life much more like what they would have the opportunity to experience in the wild. They play in the thickets, in the many trees within their habitat, search for all kinds of interesting things in the meadows, and then jump in their pond for a refreshing swim. They enjoy walking with me throughout their large habitat, and I sit in the tall grass with them while they play together and show off. They truly don’t have a feeling of being within an enclosure, and they therefore can enjoy all the positive elements of the woods and meadows while having no enemies or worries about getting all the food they want. They prefer eating their apples, pears, and carrots from my hand rather than getting them from their bowl, and they particularly enjoy having me hold a clump of grapes in the air so they can pick off grapes as they wish. It’s really Bear Heaven!

Not being predators, I can be much more relaxed with bears than I can with the big cats. I have to keep the big cats in an emotional state, as their instinctual state is very unstable and dangerous. However, with the bears I can relax and just be sure I don’t do anything that might anger them. They can be incredibly gentle and caring. When I feed them half an apple, for instance, they will make several attempts at eating it before biting down, making sure my fingers do not get in their mouth and injure me. When I shell peanuts for them, they patiently wait until I have the peanut safely out of the shell before flicking their long tongue and picking up the nut.

They are approximately 4 to 7 feet from nose to tail, and two to three feet high at the withers. They have small eyes, rounded ears, a long snout, a large body, a short tail, and shaggy hair. They differ from a grizzly in being smaller with a smaller shoulder hump, a furred rear instep, smaller claws that art more tightly curved, and longer, smoother, and more tapered ears.

There are 16 subspecies based on minor differences in appearance and DNA.

The population of black bears in North America is estimated at 750,000. They live in forests as far south as Florida and northern Mexico and as far north as forests grow in Alaska and Canada.

Wild male black bears of breeding age weigh between 125 and 500 pounds, depending upon age, season, and food. Wild females usually weigh between 90 and 300 pounds. Black bears in captivity may exceed these weights.

Usually from late May to early July. The implantation is delayed until November.

Cubs usually stay with their mother for 17 months (rarely 29 months). One to six days before the mothers are ready to mate in late May or June they force their yearlings to stop traveling with them.

Typically, the mother is 3 to 7 years old at the production of first cubs, depending upon food supply.

Bears see in color and have good vision close up.

Their smelling ability is extremely good. The limits are untested, but their nasal mucosa area is about 100 times larger than in humans.

Usually silent. A variety of grunts in amiable situations. Loud blowing noises when frightened. Clack teeth when frightened. They use a resonant, humanlike �voice� to express a range of emotions from pleasure to fear.

Good. Can swim at least a mile and a half in fresh water.

Black bears can live 21-33 years or more if they are not killed.