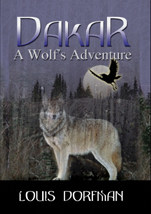 This novel is the story of a wolf named Dakar, written from the animals’ point of view. The novel chronicles Dakar’s odyssey across British Columbia, Canada, and into Montana. Dakar is the young son of the wolf pack leader, Torga, and the alpha female of the pack, Tonya. While resting after feeding, the pack becomes the target of illegal poachers looking for a trophy. Dakar saves his mother and siblings and leads the hunters away from the pack while the pack flees to safety.

Dakar is wounded during the encounter. Despite injury, Dakar keeps leading the hunters further from the wolf pack and away from his home and family. Soon thereafter he meets a mystical raven named Rahwa. This raven leads Dakar on a journey filled with adventure and surprises to get medical assistance from a strange and unexpected source.

Dakar makes unusual and delightful friends along the way and finds that he’s able to trust and relate to other animals, as well as other species, besides his wolf pack. Dakar also learns many skills that will serve him well throughout his life. It becomes ever more clear that Rahwa, the raven, is something more than he appears to be.

The journey has a very surprising and unexpected ending during which Dakar receives help from unexpected sources, overcomes obstacles he never would have believed he could conquer, and learns a great deal more than he believed he ever would about life and relationships 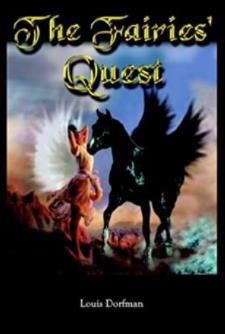 This novel is about two fairies, Penelope and Bucky, who were animals during their life on Earth. They lived in the fairy domain, where all fairies take on human form.

In order for a fairy to become an angel, he or she must successfully complete an authorized quest on Earth within 100 years of his or her arrival in the domain.

Penelope, who had been a raccoon on Earth, and her best friend, Bucky, who had been a black stallion on Earth, received permission from the fairies’ council to begin a quest on Earth. The purpose of the quest was to convince a family of enthusiastic hunters that it was both wrong to kill animals for pleasure, and it was wrong to teach their children that any killing for pleasure was acceptable. The council picked the family, the Winstons.

Cassandra, a member of the fairies’ council, and a believer that moral values on Earth should not be changed, opposed Penelope and Bucky. She was determined to see that the quest failed, and she got herself appointed as supervisor of the quest.

Cassandra, without the knowledge of Penelope or Bucky, caused a number of obstacles to hinder the quest. Some of those obstacles had unforeseen consequences.

Otters On The Loose

Meet and travel with Petey and Penny, two delightful river otters, as they escape from the home which they share with their friend, Eric Hodges, in order to be free and experience what life is like in the world outside their sheltered environment.

You will journey with them as they have adventure after adventure while learning what it means to be an animal on the loose in a human’s world. You will share the experiences they have and learn what they discover about the importance of family and friendship.