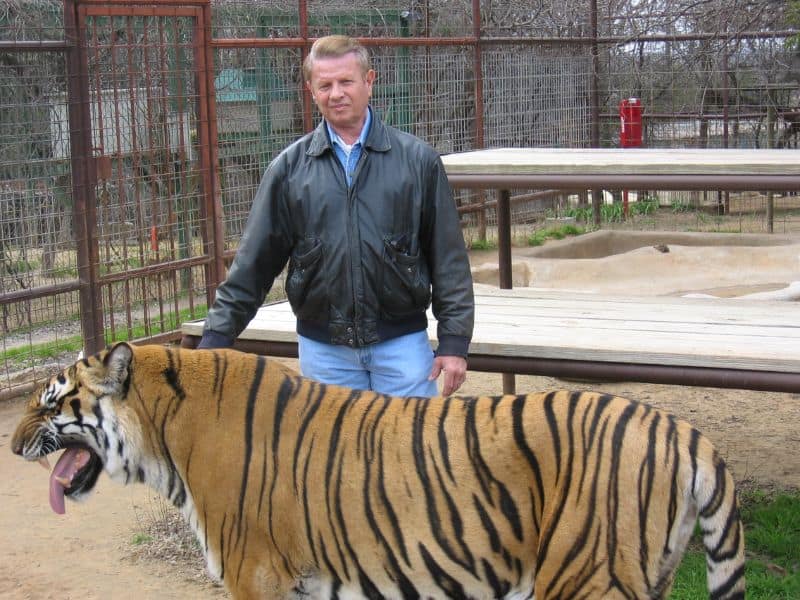 It should first be stated that, unless the individual seeking knowledge about the emotions and feelings of exotic cats has the correct motivation, this article would be a waste of time to read. If your desire is to dominate a wild animal and bend it to your will, you won’t learn much here. If you want to dominate an animal, take the easy way out and work with a dog or other domestic animal. An exotic cat, or any wild animal for that matter, is never going to be tame or domestic. It will always be wild. It won’t bend to your will without great resentment, and that resentment will cause the animal to look for a payback as it gets older.

How you approach any interaction with an exotic cat, and what that cat perceives your intentions to be, will directly dictate how close a bond you may ultimately develop. I have worked with a large number of cats throughout my life, and I am still amazed at how accurately and quickly they determine a human’s motivation for being in their presence.

My attitude is that it is an honor and a sacred trust to have a wild animal’s confidence and respect, and I owe that animal my best effort to justify that trust and return it with equal respect and concern for its feelings and desires. If you truly have this attitude, you will have a great start.

An exotic cat is an evolutionary marvel of reactions and instincts, together with a strong will. They are affected by any source of stimulation by a large multiple compared to that we would experience. The degree of their reactions to any stimulus is also much greater than the response we would consider appropriate by our standards. These factors are crucial to understanding what must be known in order to safely be in contact with these beings on a regular basis.

If a cat considers you a source of agitation at a time when it is already excited, nervous, or already agitated, it may well attack or strike out at you. There are times when any cat, no matter how much it likes you, will impulsively strike at you if you do the wrong thing at the wrong time. They don’t turn, as conventional thinking dictates, but they will strike at a perceived source of irritation or agitation when in a certain state of mind. Perhaps one hour later, you could have done exactly the same thing that caused the strike with complete safety. Your safety lies in rehearsing positive encounters and mutually satisfactory interactions and avoiding or minimizing any negative or irritating encounters.

It is extremely important that you be totally tuned to a cat when you are in a compound with it. Your safety and the quality of your relationship depends on you accurately reading the cat’s eyes, how it walks, the speed of its movements, its sounds, the movements of its tail, the position of its head, how it approaches you, and how the cat responds to your presence at that moment. Remember, these cats have all the emotions we have, but they don’t have any inhibitions. What they feel like doing is what they’ll do.

The most important element that can not be taught is your degree of comfort in the presence of a large, potentially lethal animal. If you can’t be almost totally at ease, the cat won’t be at ease either. This uneasiness causes agitation, which can lead to a strike. Remember, if the cat perceives you as a source of agitation it might strike. If you aren’t capable of being relaxed and at ease with exotic cats, perhaps you should find another avocation or vocation.

One of the most common mistakes made by humans interacting with exotic cats is to impose themselves on the cat. Always let the cat become comfortable with your presence, and let the cat dictate how much tactile interaction it wants to have at that moment or that day. I work with cats that might signal they don’t want me anywhere around them at a certain point in time, and I respect that feeling and leave. Many times, several hours later, I am lying with that cat with its head in my lap. Doing the wrong thing at the wrong time is a recipe for disaster. Many  adult cats like a few minutes of affectionate rubbing and scratching, then they want you to just stand close and talk to them for as long as you like, not touching them. If you don’t push yourself on them, you’ll have a much better and more relaxed relationship. Their comfort level with you is incremental, with them becoming more comfortable the longer you are in their compound and a source of comfort and support, rather than an agitating factor.

One thing I never do is use any part of my body as a tool for discipline or correction. Aside from moral considerations, it is asking a lot to strike a cat with your hand, then expect it to enjoy and want to be rubbed or touched by the same hand. I find that, if a cat really enjoys and wants your company, it will do many things just to keep you in its presence. I generally find that a stern “NO” being shouted when a cat is using its mouth, using its claws, or jumping on me, is sufficient to deter it and get it to cease its undesirable conduct. I always carry a spray bottle of vinegar with me. I find that vinegar is helpful to accentuate the “NO” by stimulating the senses of smell and sight as well as hearing the word “NO.” I generally don’t even spray the vinegar on the cat when I use it, only spraying it in a stream in front or within sight of the cat. Understand that vinegar is not a weapon, and it will not deter an angry  cat from attacking. If a cat continues with conduct I find unacceptable, I just leave and come back another time. It soon learns that certain conduct will cause me to leave.

Things to know and to watch

One thing everyone should know, especially those contemplating acquiring an exotic cat, is that certain cats are not safe for human interaction after they become adults. This is true, even if they are raised with every possible positive and knowledgeable step being taken. It’s just like humans—some individuals are antisocial. There is no reliable way to predict that future with a cub of several months. Therefore, someone acquiring a cat could possibly learn all the right methods, have the appropriate attitude, and still end up with heartbreak, and a cat that they can’t handle when it grows up. It happens.

Also, I have seen a number of web pages where someone endeavors to relate the personality of a particular species and its characteristics. What I have found, working with a comparatively large number of tigers, lions, cougars, and leopards, is that the differences between individuals within a species has more bearing on the cat’s personality than characteristics peculiar to a specific species.

It is important to learn what stimulus agitates a particular cat. Unlike what I have seen some people state, there is no generality about sources of irritation. For some cats, particularly tigers, a drop in barometric pressure will create agitation. Shouting makes many cats agitated, as does sudden movement, people running, unfamiliar machinery, umbrellas, hats, and laughter. These factors don’t affect every cat, but these are some of the conditions that I find frequently affect many cats.

Be aware that, when a cat is agitated, it takes little on your part to make that cat perceive you as a source of agitation and react violently. If you are present at these times, you better have great confidence that you and that cat understand each other completely, or you are in danger.

Do not make yourself the source of any games with a cub. Divert the cub’s attention to toys, balls, and other objects. You must remember that what you rehearse doing with that cub is going to be what that adult cat will consider appropriate. You will not like the games it will play with you, if it considers you a source of play. It’s cute to have a tiger cub come crashing into your legs when it’s 75 pounds, but it’s not cute when that same tiger becomes 400-500 pounds. Be consistent. They will only be completely comfortable with you if they feel they can rely on your actions and responses.

The exotic cats are fascinating, capable of great affection, possessing great dignity, and one of the most worthy of Earth’s beings. The arduous task necessary to begin to understand the complications of its personality is a worthwhile journey for those committed individuals that want to make this journey a large part of their life, and who will derive great happiness and satisfaction from achieving some success in that regard. Anyone not fitting that description might be well advised to seek a more simple and safe way to fulfill their life. The long list of people harmed seriously by exotic cats serves testimony to the fact that these animals don’t suffer ignorance or insensitivity with great patience.