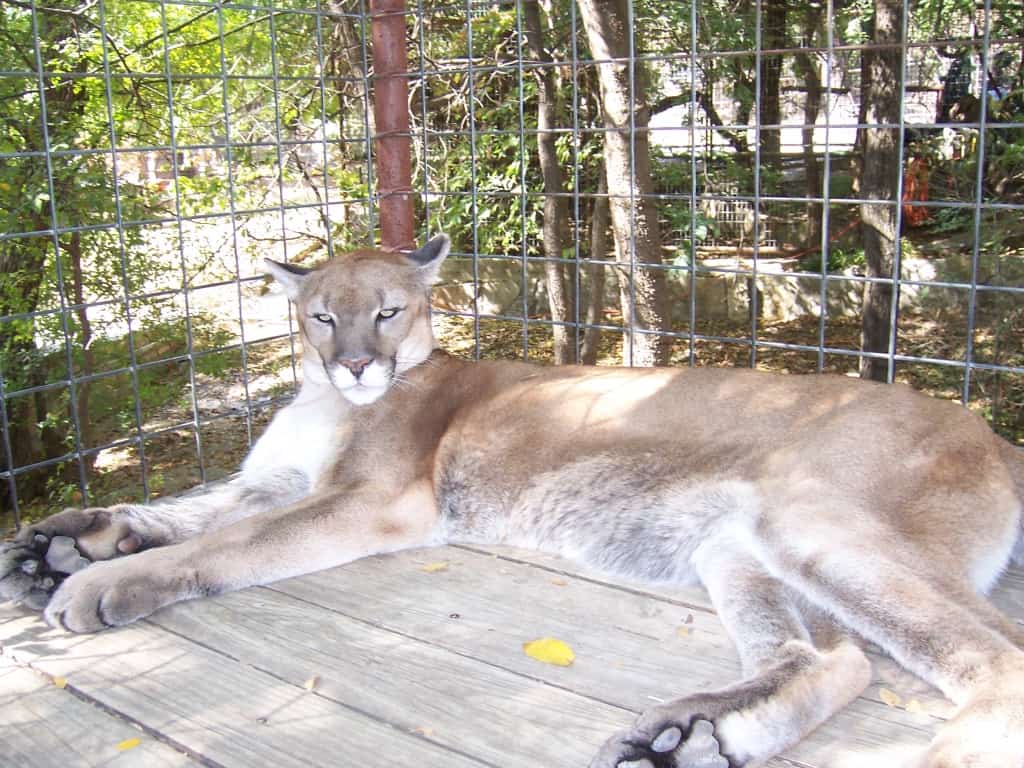 Cougars are also known as Pumas and Mountain Lions. It is the same animal, but many people are confused by the common use of all the different names. There are a number of sub-species, depending upon the area of the country in which they live. This is true of all species of big cats to some degree.

Cougars are rather volatile cats. They can become excited very easily. They are quick and alert. One of the traits I find peculiar to cougars is something I call the “cougar hug.” When very excited, a cougar will jump up and grab you and squeeze very tight. You can feel the tremendous strength they possess. It’s not necessarily an aggressive move, but it can be rather disconcerting. It can also be difficult to extricate yourself from. A cougar is more likely to develop this habit if they were “rough-housed” and wrestled with as a cub. However, certain cougars develop this trait in any case.

I have found particular cougars to be quite stable and quite affectionate. A favorite of mine is Turbo. I have had a relationship with Turbo for approximately seven years, and he has never once shown the slightest aggression or done anything other than be a loveable and sensitive being. I lie in his house in the winter with him on occasion. When he is lying on his perch or on the ground, he loves for me to lie beside him and put my arm out for him to rest his head upon as he goes to sleep. He is quite special. He loves playing with objects such as pumpkins that he can roll around and push with his front paws. He is very affectionate, and often grooms me with is tongue before falling asleep.

Indito, is a rather small cougar that is very volatile. But, by carefully diverting her attention when she becomes excited, I have been able to have a very affectionate relationship with her that has only been positive and friendly. She is very instinctual, however, and would spring upon anything or anyone that was a source of agitation or irritation.

Here are some of the characteristics of cougars:

The cougar and the African lion are the only two plain-colored big cats. However, the cougar is generally much lighter in build, has a smaller head, and males do not have a mane. The cougar?s coat can be red-brown to blue-gray, and almost any color in between. They have a long neck, slim, elongated body, long tail and small ears. They are generally about the size of a leopard but weights and measurements vary greatly across the cat’s broad geographical range. Males weigh 148-227 pounds, measure 42-77 inches head and body length, and have a tail of about 26-31 inches. Females measure about 38-60 inches head and body length, weigh about 80-133 pounds, and have a tail between 21-32 inches long.

Cougars can live in coniferous forest, tropical forest, swamp, grassland, and brush country. They are found at elevations that range from sea level to 14.700+feet. They are the most widely distributed of any of the American cats. Its current range includes Canada, North America – west of the Great Plains, southern Florida, Mexico, Central America and South America.

2 to 3 cubs are born after a 90-95 day gestation period. Cubs are born with a spotted coat that disappears as they become adults. The cubs nurse for about 3 or more months, but begin to eat meat as early as six weeks of age. Young cougars become independent when they are about 2 years old, and littermates may stay together for a few months after leaving their mother. They are solitary animals. Females may share overlapping ranges, but there is usually little overlapping between resident males. One male range may overlap that of several females.

In general, deer are the most important part of the cougar diet, but they also feed on beaver, porcupine, hare, raccoon, opossum, and feral hog. They usually drag their kill to a secluded spot after eating its fill, and then cover the carcass with vegetation. They may feed off of the same carcass for up to a week, depending on the size of the kill.