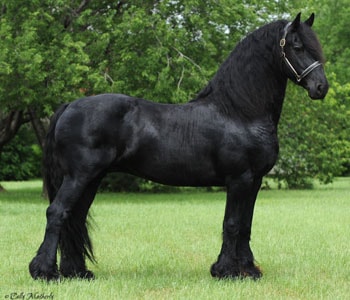 My wife, Julia, and I decided to begin breedng Friesian horses years ago. This breed is quite unique and rare in the United States.

The black Friesian breed of horse, over 2000 years old, is one of the oldest domesticated breeds in Europe. It is native to the province of Friesland in the northern Netherlands. During the 16th and 17th centuries, but probably earlier, Arabian and Andalusian blood was introduced to lighten the breed. This has given them the high knee action, the small head and the arching neck. The Friesian horse has been kept free from influence of the English Thoroughbred. During the last two centuries, the breed has been bred pure and is considered to be a warm blood. The Friesian has been used to form the basis of many breeds, such as the Shire, New Forest, Dale, Morgan, Swedish Warmblood, the Orlov Trotter, and was recently used to revive the Kladruber breed.

The Friesian horses are the only representative of the original native horse in Western Europe. The armored knights found the Friesians to be very desirable, having the strength to carry great weight and still maneuver very easily. The Hungarian King Louis II used a Friesian stallion on the battlefield on June 15, 1526. The Friesian was used as a war horse by Friesian soldiers fighting with the Roman armies, and they were later used by knights who traveled all the way to the Middle East with the Crusaders.

Their suppleness and agility made Friesians sought after in the riding schools of Paris and Spain in the 15th and 16th centuries. In the Middle Ages it was mainly used as a knight’s horse but in the 18th and 19th century the Friesian was especially famous as a trotting horse for short distances. The Friesian was so well adapted as a fast trotting coach horse that it was, in fact, Friesians who invented trotting races over short distances (320 meters) during the 18th century.

New possibilities for the use of Friesian horses were sought. Today the Friesian horse is used for many purposes: carriage driving, pleasure riding, combined driving and for riding in many different disciplines.

Now the future of this ancient breed looks relatively favorable. There are only about 4000 Friesians in the United States, and they have not been well known here, but the excitement over this breed is catching on.

The Friesian has a very specific appearance. It is a noble animal, possessing a kind and gentle character with intelligence and strength. The horses are always completely black, with a very long and wavy mane and tail, with fetlocks (also called feathers) on the legs. They have a relatively small and noble head, often with an arched neck and very distinctive movement with accentuated leg action and powerful hindquarters. The average height is 15-17 hands with an average weight of 1300-1600 pounds. Generally the Friesian has a lively and pleasant disposition. The Friesian is, by nature, a talented show horse with its shiny black coat, flying mane and tail, and high knee action. Today, they are now gaining further respect in the dressage arena as some specimens of the breed are reaching Grand Prix level due to their natural carriage and elevated movement.

The Modern day Friesian has also enjoyed its share of publicity, regularly being seen on the big screen in movies such as The Mask of Zorro, Interview with a Vampire, Sense and Sensibility, Emma, Disney’s-Tall Tales, Sleepy Hollow, and Bedazzled. There was the magnificent Othello, known as Goliath, a Friesian who caught many people’s eyes in the 1986 movie, LadyHawke. For those who have traveled to Harrod’s Department store in London, you may have seen the impressive Friesian stallions driving their carriages.

The Friesian’s beauty, size, rideability, and temperament make them a perfect choice for the whole family.

Our Friesian stallion, Ceimpe, was born and raised in Holland. He is a giant, but he has a loving and gentle nature. He is awesome in appearance, looking like a fantasy horse from some childhood storybook. Only a unicorn would be more breathtaking.

Ceimpe was approved by the German Registry for Friesians, the FPZV, as a breeding stallion, one of only 30 or so Friesian stallions in the US approved for breeding. He had to undergo a strenuous 50 day Performance Testing by several German riders and judges, as well as having to undergo a difficult conformance and personality testing, which was done two years ago.

Above is a photo of Ceimpe undergoing part of his performance testing.

He is a dream to ride, once you get used to the strength of an 1800 pound animal whose pounding feet on the ground seem to make the ground around you shake. His flowing mane waving in the breeze when running can transport your imagination to an era hundreds of years ago.

My wife’s gelding, Lancelot, is also extremely large and strong. He has a very playful and loving nature, and when my wife isn’t riding him she’s playing with him much as she plays with our dogs. He follows her everywhere and if she stops, he rests his head on her shoulder.

Our mares also possess the same loving and affectionate disposition, and they compete for our attention when we are with them. We are very much looking forward to the foals coming and the time we will spend training and caring for them.