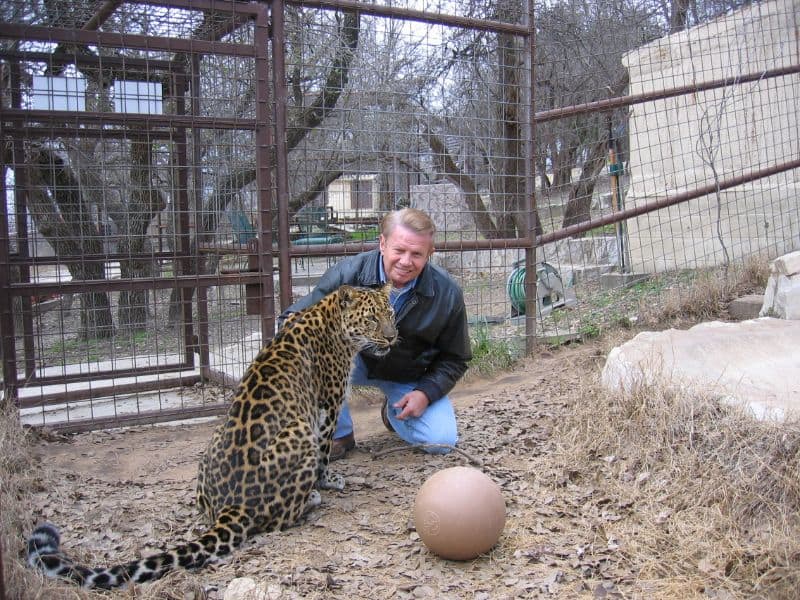 Leopards are considered by many to be the most treacherous and dangerous of the big cats. They are undoubtedly very cunning. It is said that there are leopards living in downtown Nairobi, Kenya. They are definitely adaptable and intelligent cats. Leopards are the only big cat that usually doesn’t chase down their prey to any extent, usually hiding in trees over water holes or some such hunting trick. They are said to be the strongest big cat, pound for pound. In the wild leopards take their prey up into a tree frequently, to keep it from other predators. I have heard of a leopard taking a full-grown zebra or a half-grown giraffe up a tree.

taming wild animals interacting with wild animals conservation. However, my experience with leopards has been, for the most part, very positive and affectionate. They are always observing me, no matter how affectionate they appear, and seem to always weighing whether or not I deserve their respect. I have had a relationship with a black leopard named Onyx for seven years. He is pictured here. In that time, he has only been very affectionate and friendly, often grooming me for long periods of time. But, his eyes are always watching, and you can almost see his mind analyzing every aspect while appearing relaxed and nonchalant.

The relationship I enjoyed with two leopard sisters, Mia and Tali, was quite unique. They came to the International Exotic Feline Sanctuary some years ago. They very much disliked human contact or having humans anywhere near their habitat when they arrived. They had been used quite extensively in an outreach program prior to their arrival, and they seemed to be resentful and assumed that any time humans were around they were going to be put in a position they disliked, perhaps due to the amount of traveling they had endured. In any case, I developed a bond with them over a relatively short period of time, approximately two months, that became very close and intense. Soon it was necessary to move them from their temporary quarters to their permanent habitat, about a quarter of a mile away. I was concerned about putting them in a small traveling cage to move them and breaking the bond and trust we had built. I therefore decided to ride with them inside the travel cage to assure them that it was all right and that since I wouldn’t show any discomfort, hopefully they would take a cue from me and accept that it was not something to become upset about. I felt they looked to me for security and support. The downside was I would be locked inside this travel cage with them for quite a while. Fortunately, it worked out far better than I had hoped. The wilder of the two, Tali, relaxed as soon as I put my arm around her shoulder and assured her it was okay. She never snarled or showed any irritation or agitation. Mia, the more secure of the two, laid across my lap munching on a turkey neck the entire trip. Once we arrived at their new habitat, I spent the day inside it with them. Ever since then, almost three years ago, they have considered that I live with them, and in fact I believe I could. Prior to our relationship flourishing, the two sisters often fought and it was believed they would soon have to be separated. Since we developed this close bond, they also have developed a close bond with each other, frequently playing together and grooming one another. There was absolutely no jealousy between them towards me, except during periods when one or the other of them is in heat. Even then, there is only an occasional snarl or hiss towards the other sister.

The leopard is quite similar in appearance to the jaguar, but it lacks the jaguar’s massive head and robust physique. The background color of the leopard’s fur varies from the gray to rusty brown. Leopards living in desert or savanna areas are usually paler, while those living in tropical forest are darker. The coat is covered with small black spots and rosettes, but unlike the jaguar, the open rosettes do not usually have smaller pots inside. All-black leopards are common, especially in tropical forest.

Leopards measure 36-73 inches head and body length, with a tail of 23-43 inches. Males weigh 82-99 pounds, whereas females usually weigh about a third less.

Leopards are great generalists in terms of habitat use. They seem to be able to live in almost any area that has sufficient food and cover. They are found in lowland rainforests, wooded savanna, scrub, and rocky mountains, deserts, and agricultural grazing land. They have one of the widest distributions of any of the felids. It is found throughout much of Africa, except the Sahara, and in parts of Israel, the Middle East, Pakistan, India, Southeast Asia, as well as part of China and Siberia.

In the northern part of its range the leopard mates in January and February, and elsewhere breeding occurs throughout the year. After a gestation period of 90-105 days, 2 or 3 young are born in a secluded den. The cubs weigh about 1 pound at birth, and open their eyes when they are 10 days old. The young remain with their mother until they are 15-24 months old. The leopard is a solitary cat. Males and females usually maintain territories, which may be 3-25 square miles in size. A male’s territory often overlaps the territory of more than one female.

Leopards feed on a wide variety of prey. They will eat almost anything from insects and rodents to large ungulates, and are known to kill prey weighing several times their own weight. Commonly they prey on animals such as gazelle, deer, pig, and monkey.