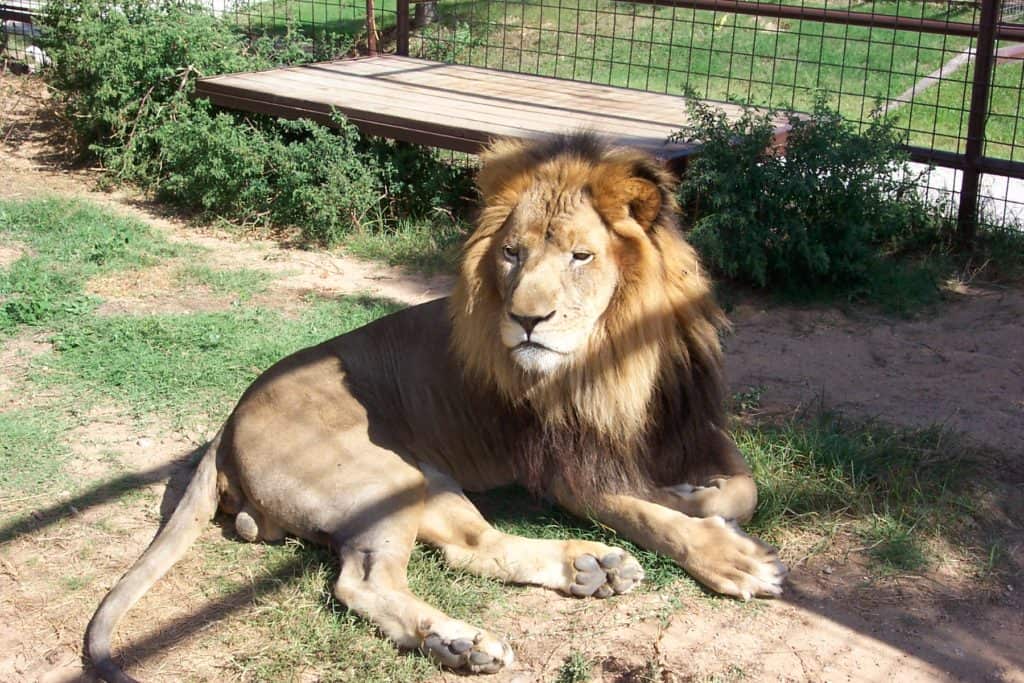 Lions are the only social big cat. Lions live in social units called prides. All other big cats are solitary, although some species are more so than others. In part due to their social nature, lions are very possessive. This comes into play when another animal, including a human, come close to one of their possessions, including their toys. I have learned that I can gauge my bond with a lion by how much it allows me to come near its toys and personal objects. There are lions with which I work that will think nothing of me rolling around their ball or tire and even enjoy doing so with me. I feel rather comfortable around these lions.

Lions also possess a trait that can be very dangerous to the unaware or the unfocused human. When lions greet each other in their natural environment, one of the playful activities they engage in involves mouthing the other lion’s legs. So, they will frequently choose to do so with their human friends. Unfortunately what seems affectionate to the lion might mean a fang going through the skin all the way to the bone on a human. Many of the videos one sees of supposed lion attacks are often this mouthing activity taken to extreme or an unexpected reaction from the human trainer that then turns to aggression on the part of the lion. A number of big cat trainers hate working with lions because they aren?t quite in tune with some of the instinctual play activities normal to lions. Male lions are also inherently very pushy, and they enjoy pushing a human friend around or moving him/her around at will. Therefore, if one is to work with a lion, boundaries must be established, and the lion better respect the human and desire to modify its behavior in order to please its human friend. Otherwise, it will be a rather unpleasant interaction.

Nevertheless, I have a number of very loving and happy relationships with lions. Samson, pictured here, is one of the most beautiful male lions I have seen. His huge black mane makes him truly appear to be “king of the jungle.”  He truly loves affection, and he will lie beside me for hours if I’ll just stroke my fingers through his mane. I’ve never seen an animal, wild or domestic, that likes affection for long periods of time to the extent that Samson does. Hakeem, also pictured here, is a male lion that is inherently very pushy. He will put his head against my body and attempt to push me around his habitat. When he tires of this game, however, he will lie down and contentedly enjoy me stroking his mane in the same manner as Samson. He often falls asleep while I’m stroking him.

There are a number of sub-species of lion, and the various sub-species are easily seen in the males due to differences in color and size of their manes.

Possibly the best known of all the big cats, the lion is well known for its habit of living in prides or groups. Adult lions usually have a plain unspotted coat, light brown to dark ochre in color. Cubs are marked with spots, which sometimes persist on the legs and belly until they are fully grown. Male lions have a brown mane, which tends to grow darker and fuller as the animal ages. The tail has a black tuft at the end. “White” lions occasionally occur in the Transvaal region of southern Africa, but these are not true albinos. Males usually stand about 48 inches at the shoulder and measure 67-99 inches head and body, with a tail of about 35-41 inches. Male weights range from 330-550 pounds. Females are smaller, usually standing 43 inches at the shoulder, and 55-69 inches head and body, with a tail of about 27-39 inches. Females weigh about 265-400 pounds.

Lions are generally found in open habitats — grassy plains, savannas, arid woodlands, and semi desert. They are found across Africa south of the Sahara, south to Botswana. A small population consisting of a few hundred Asian lions still survives in the Gir forest of western India.

Lions have no fixed breeding season. Females in a pride will often come into estrus and give birth in synchrony. One to four cubs, each weighing about 3.25 pounds are born after a 110-day gestation period. Cubs can suckle from any female in the pride, and young usually remain with their mother for two years. Lions live in prides that range in size from 3 to 30 individuals. Pride size varies according to the area and prey availability. Groups of related lionesses and their cubs form the stable core of a pride. Daughters are usually recruited into the pride but males leave as they become mature. One to seven males associate with the group of females. Male tenure with a pride can be as brief as a few months or as long as six years, but eventually the pride males are driven off by another group of males.

Lions feed on a variety of large and medium-sized prey, including giraffe, buffalo, zebra, antelope, wildebeest, and warthog. Lions will also eat carrion and smaller prey.