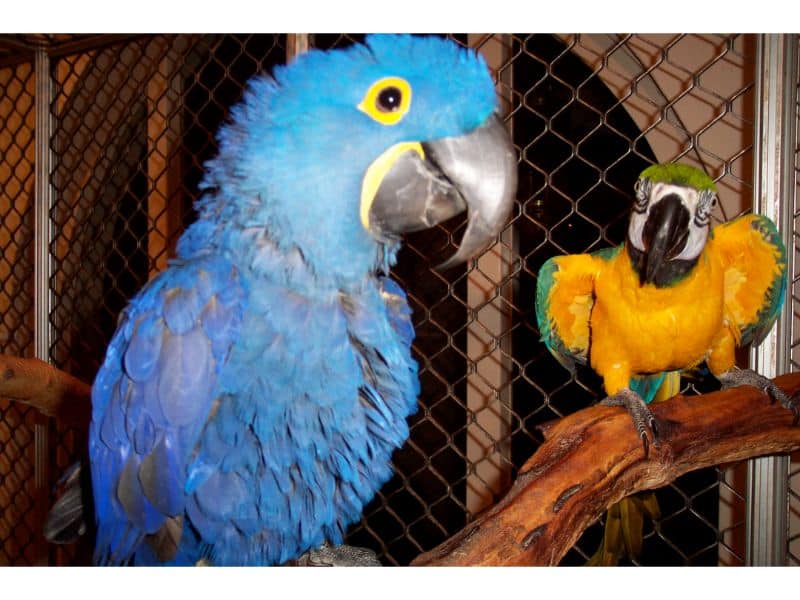 Macaws and cockatoos are the only animals I have put on this website that are properly considered as pets. While they are really wild animals, they can be tamed and raised as pets without any serious injuries to humans.

I have three macaws and two cockatoos, which I have had for between 15-35 years, depending on the individual bird. They are the most underrated of pets, since they have wonderful and complex personalities, great intelligence, live a long time, and are relatively easy to care for physically. I underline the physical part, because their emotional well-being is a bit more complex. They are extremely inquisitive, curious, affectionate, and playful animals that need a great deal of time and attention paid to them in order for them to be happy and well adjusted. I frankly feel a bit guilty that, due to the many other animals with which I spend time, I don’t give the birds the amount of time to which they are entitled.

All my birds are quite loveable and playful. Juliet, pictured here, is a Hyacinth macaw, a very rare and very sweet sub-species of macaw. They are the largest of the macaw family, and they frequently also have the best dispositions. Juliet is totally loveable, and she loves to kiss and rub her large beak against my cheek for long periods of time. She is also an escape artist, as are many of the parrot family. She can unlatch most latches, and she can untie most knots. One of my cockatoos, Tina, can untie any knot I have seen. Often she can do it in a few minutes.

Given the right care, hygiene, and food all the members of the parrot family are rather hardy. None of mine have ever needed to go to a veterinarian since I’ve had them, and I’ve had Zeus for 35 years. The youngest bird I have, Tina, I’ve had 15 years.

All of my birds enjoy playing with toys, watching television with me, and teasing the dogs that stay in my bedroom at night. My ex-wife used to raise Doberman pinschers, and Zeus would get down on the floor and chase the dogs all over the house. I have yet to see a dog stand up to a macaw.

Characteristics of macaws and cockatoos

The Psittaciformes (parrots, lories, cockatoos, parakeets) are a unique order within the birds of this world. In taxonomic systems they are normally filed between the Columbiformes (Pidgeons) and Cuculiformes (Cuckoos and Touracos). The psittacine birds exist in all shapes and sizes.

One of their typical characteristics is the big head with a bended strong beak. The upper part is curved downward, ending in a sharp tip and fits over an upward curved lower mandible with a broad front. The upper mandible of the beak is movable against the head with an extra angle and muscles, while in other birds this mandible is blocked to the skull and more or less unmovable. The special mechanism of muscles for the beak (crosswise up and down) gives great power.

The nostrils are placed in a naked or feathered fleshy area at the base of the upper mandible.

Also the zygodactyl feet (two toes forward, two back) are obvious and give them excellent ability in climbing and manipulating things. The outer toes are prolonged against the inner.

Compared to other orders of birds the Psittaciformes have less but stronger feathers. The parson’s nose is reduced and there are special powder dunes which produce a fine mealy dust to conserve the plumage. Generally a psittacine bird has 12 tail feathers. The shape of these feathers varies within the genera/species. The feathers of the Psittaciformes contain a specific group of pigments, called Psittacin which in combination with others lead to the beautiful colors that are found in these birds.

endangered species books on animals training macawsThese birds live in a great variety of environments from hot tropical rainforests to nearly antarctical climate. Many of their species are highly specialized in nutrition and biotope requirements. Others seem to be cosmopolites. There are more than 330 different species distributed from equatorial to near antarctical regions of the world. Some species like Myiopsitta (Quaker) or Psittacula sp. (Ringnecks), which escaped from captivity, have settled successfully in cities and parks, which do not form their native environment.

Outside the breeding season parrots in general are very social birds, which gather in flocks from small parties to thousands in number. This instinctive socialization soon made them pets in human history. Kept in captivity parrots are forced to take man as flock-social partner by instinct if there is no natural partner available.

Pair bonding is very strong. Young parrots may choose their lifetime partners before maturity. In some of the species it is even possible that a bird will die after the loss of its mate.

Fossil relics of birds are rare, so the development of the families/genera cannot be tracked back clearly. The great differences between the geographical groups and the lack of intermediates between most of the families leads to the conclusion that the “endemic development” of Parrots started in early history of the caves. The oldest fossil parrot has been found in Great Britain and is dated from the early Eocene – more than 60 million years ago. It could be identified as some sort of conure by the specific form of tibia-bones parrots have in their feet (zygodactylism). It is believed that under the existing psittacines Strigopidae (Kakapo) and Nestoridae (Kea, Kaka) show the oldest living forms of these birds.

Because of their instinctive social behavior parrots always have been famous as pets. Humans are accepted as flock-partners and it is possible to touch the bird because preening is an expression of partnership within the psittacines. They may learn to imitate human voices – and even use it to communicate with their human partners. Their great capability to learn certain tricks and behavior which is not typical for the wild bird is another reason

The broad skull of the Psittaciformes gives room for a more extended brain than in other birds. Well known is their great capability to learn. In captivity many parrots can learn to imitate human language and also may even use it to express their needs. Researchers have shown that is possible for a parrot to identify “same” and “different” attributes of known and unknown items and to express this in human language. But as in all “intelligent” beings the individual’s character varies very much. – One African Grey Parrot will learn to speak easily while the other refuses to learn a single word.

Left aside human influences it is estimates that the loss under young psittacines is as high as in other birds. Only in Australia wild parrots are banded or receive wing-tags for field observations, so no secure data about the life spans of parrots in general is available.

Well known is the longevity in captive parrots. There are proved records of larger birds like Cockatoos and Amazons, which reached an age of more than 100 years.