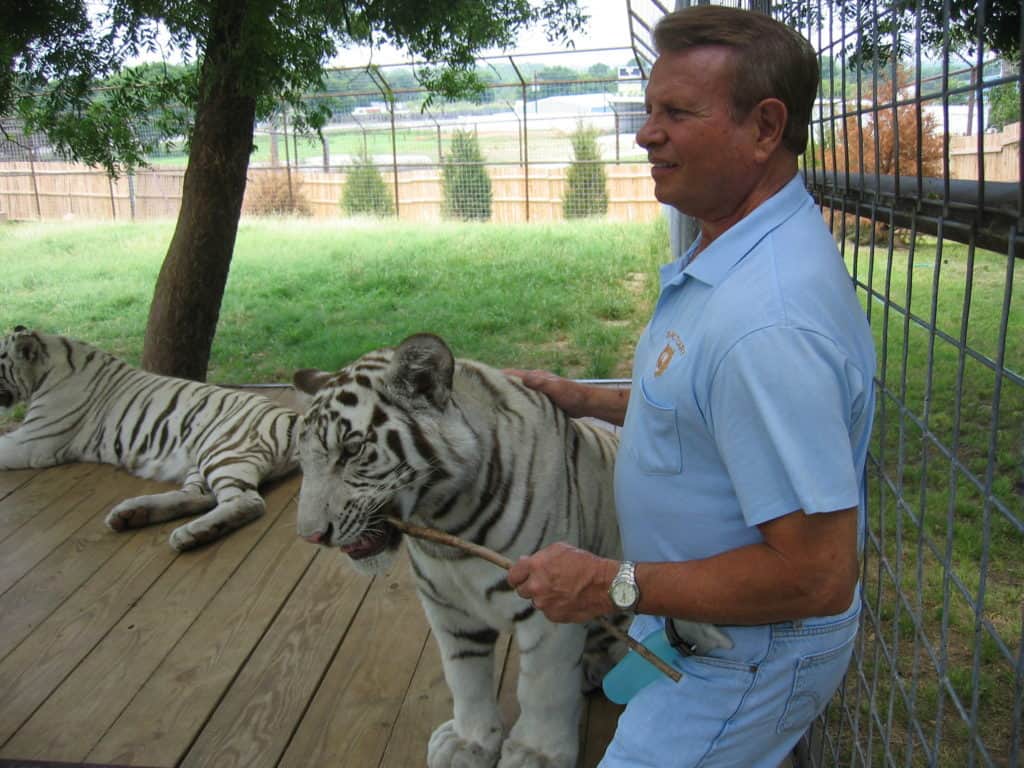 The term positive reinforcement has been widely used in recent years when discussing training or interaction with animals, both wild and domestic. Generally, when one hears the term one thinks of training sessions in which the methodology utilized is a reward of some type for a positive response rather than discipline or punishment for mistakes or inattention.

However, I would submit that really effective and appropriate positive reinforcement involves the total interaction between animal and human at all times in which they are in sight or contact with each other. An animal–particularly a wild animal–is constantly evaluating its attitude towards a specific human and humans in general, as their instincts do not have any programming to take humans into account. The only instinct that applies is the instinct to distrust and be wary of anything or anyone that isn’t part of their family.

The more one predisposes any animal, including a domestic animal, to presume that the human with whom it is dealing is going to be a source of security, support, and comfort, the easier the task of convincing the animal that whatever action one is attempting to get it to complete will be a fun and enjoyable activity.

I put this concept into practice with an 18-month-old German shepherd I rescued that had been found wandering the streets of Dallas eating out of garbage bags and fending for herself. She had been completely independent and had developed an attitude that humans had always been a source of disappointment and disillusionment. She was not housebroken or trained in any manner. Rather than taking the attitude that I must immediately train her to socialize her, I waited a few weeks until I could sense that she had determined I might actually be someone she could trust and that she should give me the benefit of the doubt. When I first got her, the defiance and resentment to any attempt to modify her behavior in any way was quite obvious. Therefore I waited until I saw a desire on her part to please me, then I started showing her things that would make our relationship better. She enthusiastically attempted to understand what I wanted and to perform accordingly, receiving a great deal of praise and affection for her cooperation. I didn’t use any treat rewards; only praise and affection. I was pleasantly surprised to find that she was perhaps the easiest dog to train with whom I have worked. I have no doubt that, had I attempted to modify her behavior two weeks previously, we would have never achieved the relationship we began to enjoy in a very short time.

Positive reinforcement should be a continuing process, not an event. By that I mean that the best results will be obtained if the animal is constantly reassured that all its human contacts are considerate and thoughtful about its well-being and welfare. This is particularly true with wild animals. I find that humans are always being “auditioned” by wild animals, which have a deeply embedded wariness about human contact. They analyze and process every encounter to determine how they should feel about that particular human and humans in general. Therefore, all keepers and other employees that have any contact or are in close proximity to a particular wild animal at any time should be taught the best way to conduct their necessary work in a manner that is most reassuring and least stressful to the animal. Then, any operant conditioning or other training can be conducted in an environment that has been preconditioned to be positive between the animal and the behaviorist/trainer. I know that some facilities, such as SeaWorld, require their veterinarians to have social interaction with the whales, dolphins, and other animals when they aren’t in need of veterinary care, so that their presence doesn’t just signal a stressful event. This procedure makes their work significantly more positive for both the veterinarian and the animal.

In working with the exotic cats that I am rehabilitating from previous mistreatment by humans, I have been amazed at their desire to modify their behavior to please me, once they determine that I am a source of comfort, security, and support. In some–but not all–cases, they also look to me as a source of affection. But even the ones that don’t want affectionate contact enjoy my presence to the extent that they will modify their behavior in order to keep me in their presence. Perhaps we will play with their balls, or I’ll just sit beside them as they lie on their perch. In all cases, however, the constant preconditioning and repetitive display of respect I convey to them is my source of safety. They come to look upon me as a welcome and pleasant interlude in their day. My entrance to their habitat is not a significant event, as they over time come to look upon my presence as a natural part of their environment. Frequently the cat will not even get up, and I may sit or lie beside it. Generally, I can feel the animal relax and often it will go to sleep. I use no rewards except praise, respect, and affection.

This conditioning can make veterinary procedures or any other desired activity much easier and less stressful. In addition, there is a markedly increased safety factor, for if the animal does get out of its habitat, it does not go into an automatic defensive or aggressive mode towards humans. And, if a keeper accidentally enters a habitat when the animal is not secured, there is much less likelihood of a serious injury occurring.

One must understand, however, that just like humans, there are anti-social animals. If such an animal is encountered, all the positive reinforcement and appropriate methodology will not produce the results desired. However, positive reinforcement processes still will improve the relationship to some extent between caregiver and animal. I think it is important to understand that these animals exist, for otherwise time and energy can be wasted on them that would be better spent on the more receptive animals that could benefit to a greater extent. Perhaps, over time, those anti-social animals can be rehabilitated. It can be a long process, however. I recently rehabilitated a jaguar that was extremely aggressive and disliked having any human in close proximity, even outside its enclosure. It took me a number of years to develop that trust. Now, although I enter the jaguar’s habitat, she still does not prefer physical contact; rather she likes to lie about 10-20 feet from me and just have me stand there and talk to her. It has affected her relationship with other humans and caregivers in a very positive way. She will approach and lie close by employees and volunteers who sit outside her fence now, so her quality of life is much improved and less stressful.

Probably the most dangerous and potentially aggressive exotic cat of the 66 cats at the International Exotic Feline Sanctuary, where I used to rehabilitate cats that have previously been abused or otherwise mistreated, was a six-year-old Siberian tiger named Caesar. During the period when he was just becoming an adult–from 18 to 36 months–he tested me to see if I deserved his respect on almost a daily basis. If I hadn’t known him so well, I would have been sure he was going to attack me at any moment, as he would act out the posture and attitude that usually precedes an attack. However, once he saw that I understood him and was not intimidated, he would “chuff” and rub up against me then lie on his perch where I would sit beside him while he went to sleep. After years of this positive reinforcement, Caesar is now one of the most trustworthy and stable cats with which I work. He never showed any aggression towards me and is even becoming increasingly affectionate–something he did not exhibit with any regularity until the later years.

I believe that the best way to create an environment at any facility, where positive reinforcement is a consistent and ongoing process between all human employees, volunteers, and the resident animals, is to emphasize the satisfaction and benefits one will derive from knowing they have had a part to play in improving the quality of life of the resident animals. My approach is to treat all animals with the respect and consideration with which I would treat any other deserving humans. I am constantly amazed at the degree to which even wild predators will respond to such respect and return it with consideration and gentleness towards me. So, the process can work on even very aggressive predators, but it must be conducted with consistency, patience, and respect for the animal.