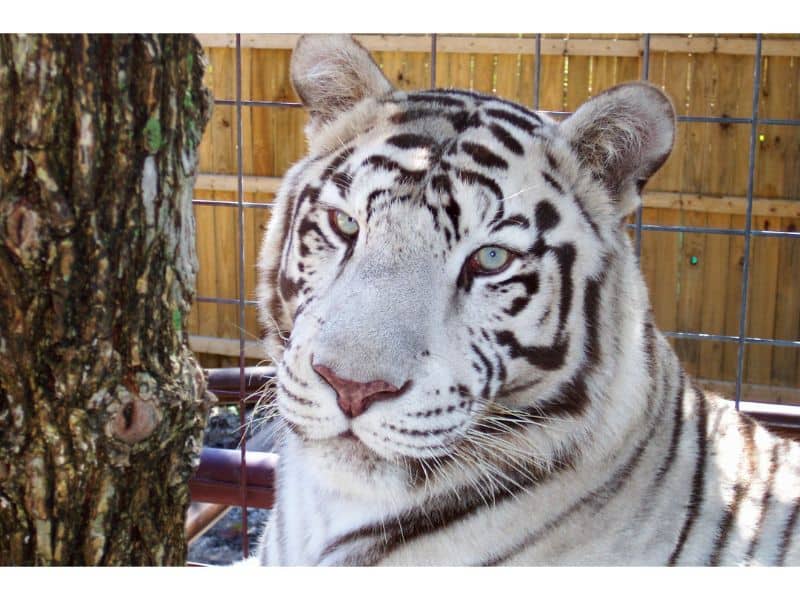 Tigers are perhaps the most fascinating of the big cats. Perhaps it’s because of their size, or their vivid colors, intense eyes, large teeth, or perhaps a combination of all of these. Tigers elicit awe, admiration, fascination, and fear. Beneath all the color and physical appeal, however, there is a truly interesting and admirable being.

Again, understanding that generalizations about any species may not completely apply to a specific individual, tigers are perhaps the most emotional of the big cats. They react to stimulation of any type to a greater degree than do other species. Many things can affect a tiger that wouldn’t necessarily affect another species, such as changes in barometric pressure, particular noises, wind, and many more too numerous to list.

Because tigers are so emotional, they are capable of unbelievable affection. The white tiger, Sabrina, was probably the most affectionate animal I know. She’s was also extremely dangerous because of her intense emotional makeup. I belonged to Sabrina since 1994 until her death in 2011. To say I owned her would be trivialize our relationship. If anything, she owned me. She acted like the princess she is. We get along wonderfully because I defer to her every whim, and the reason we get along so well is everything is truly her way. She returns the favor by treating me with great love, gentleness, and consideration, and she does often do things to please me, because it pleases her to do so. After all these years, I still don’t get used to how beautiful she truly was. Her ice blue eyes can pierce through you or be as soft as a marshmallow. There are only between 200-300 white tigers in the world.

By the way, when I talk about wild animals’ affectionate nature or other endearing qualities, I want to caution the reader not to be motivated to go out and obtain such an animal. Understand that some very potentially dangerous qualities also offset the good and sensitive features of these animals’ nature. (See my article on why exotic cats don’t make good pets.) Only those humans that the tigers trust and respect will be able to see the sensitive and affectionate side of them. One often hears someone say, “they’ll like me because they’ll know I really care for them.” Wrong! They could care less whether you care for them initially. They initially judge you as either prey, dangerous, a source of irritation, or perhaps someone they want to get to know better and perhaps share time and space with. Only in the latter instance will you survive the initial encounter with a grown tiger. And, if they ultimately decide you’re not worthy of their respect, you won’t survive for long.

The message I’m articulating at first seems contradictory, I know. But, the reader should understand we are talking about a wild predator. They have a complex and deep emotional makeup and many facets to their personality. I have spent many, many years working with and studying wild predators and developing the ability to communicate with them in a nonverbal, but complex, manner that makes us both comfortable with each other’s presence. Absent that communication, I wouldn’t be safe or able to see the loveable and sensitive qualities they possess. The big cats, even those with whom I’ve had a long and wonderful relationship, would kill me as quickly as anyone else if I did the wrong thing at the wrong time. My safety does not lie in my relationship; rather it lies in my knowledge of what they’re feeling and thinking at a given time and how to respond to that feeling.

That said I have spent countless hours in the company of some really unbelievable tigers. Caesar was a large male Siberian tiger that is extremely aggressive. Yet, he would lie beside me on his perch and can be as loving as the most gentle house cat. Sabrina and I can nap together lying in the hay of her house on a cold winter’s day with her paw wrapped around my body, and it can be like meditation for me. Probably the most purely beautiful moments of my life. However, on other occasions when she is agitated by external stimuli or perhaps in heat, if I so much as wiped the sweat off my brow, she would attack me. They have no inhibitions.

Tigers have one characteristic that can be very disconcerting. If one has ever seen two tigers playing with one another–perhaps on a documentary–one will see that they frequently rise up on their hind legs and paw at each other playfully or lean on each other. Tigers can do that on occasion with their human friends, without regard to the size difference that they don’t take into account. It can be a bit of a problem. Sabrina is a consummate jumper. She loves to jump up and rest her upper body on my shoulders, despite the fact she outweighs me by over 300 pounds. I have to be well braced, and pushing her off is like pushing against a giant marshmallow. Needless to say, I have developed several techniques to avert this playful, if unwelcome, game.

Phoebe, was a sweet, gentle tiger. She is a twelve-year-old tigress that resideed at the International Exotic Feline Sanctuary. Phoebe was raised by her mother and then put into a breeding program in which she had several litters of cubs. She ended up at the Sanctuary after being confiscated. Most animal experts will say that one must take a baby cub off her mother and feed her a bottle at a very young age in order to ever be in the unprotected company of humans. However, I began spending time with Phoebe when she was nine years old, and a casual observer would not be able to tell that I didn’t raise her. She is a unique tiger, however, and I probably wouldn’t be able to have nearly so positive a relationship with another tiger in like circumstances. She loves having her back scratched and just having me in her company talking to her in an affectionate manner.

Being the only felid animal with stripes, the tiger is most certainly the most easily recognizable big cat. Its coat varies from dark orange to reddish ochre, and the belly, neck and insides of the limbs are creamy white. The Siberian tiger generally has the palest coat while the tiger in Indochina is much darker. A series of dark brown or black stripes run vertically across the body.

Tigers can live in a variety of habitat types and climatic conditions, but they require sufficient cover, year-round access to water, and a steady supply of large prey. They live in snow-covered mountain regions, tropical evergreen forest, mangrove swamps, and dry deciduous forest. They are found in India, Nepal, Bhutan, Bangladesh, Burma, Thailand, Vietnam, USSR, and perhaps China.

Tigers mate at any time of the year, but most frequently from November to April. Two to three young are born after a gestation period of 104-106 days. The young nurse until they are about 6 months old, and male cubs grow faster than female. The young leave their natal range when their mother has a new litter, or usually when they are about two years old. They are solitary animals. Females may have overlapping or exclusive territories. Home range size is strongly influenced by prey density, and female ranges from 6.2 sq. miles to 368 sq. miles have been recorded. Male ranges are much larger, and may overlap several female ranges. Despite the fact that these cats usually hunt by themselves, tigers are not totally asocial. Female tigers spend a large portion of their lives accompanied by dependent young, and several tigers may come together to share a kill.

Tigers feed on whatever large prey they can catch. Their diet includes deer, pigs, and buffalo. They readily kill domestic livestock, and have been known to include man in their diets.