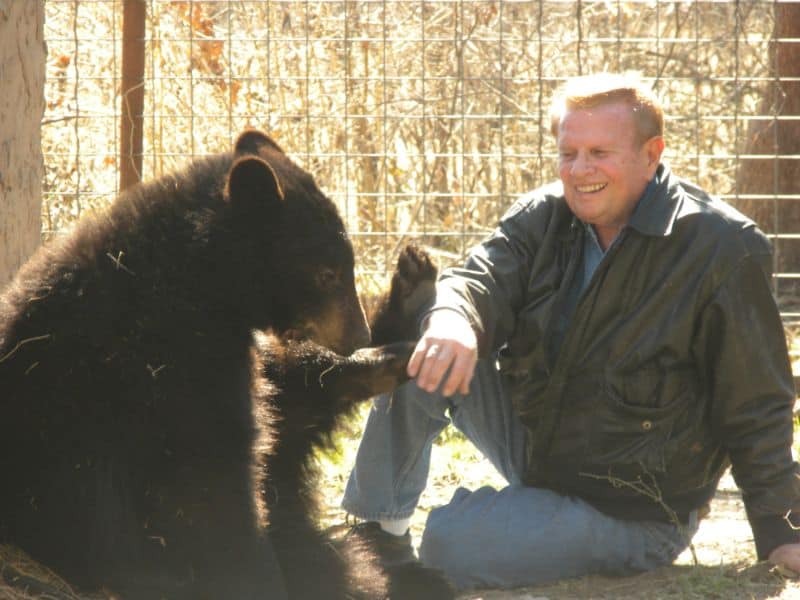 Since this article encompasses wild animals generally, including predators and non-predators, it must necessarily be rather broad-spectrum in content. However, there are some characteristics and personality traits that are common to most wild animals and must be taken into account when attempting to either rehabilitate a wild animal or care for it in a sanctuary for the remainder of its life.

Wild animals have instincts that make them apprehensive of any animal/human that is not ordinarily present in its normal day-to-day encounters. This means that the first thing a human wishing to have any sort of relationship with this animal must do is earn its trust. This means that first you must convince the animal that you mean no harm.

Then, you must speak and move in a manner that relaxes and assures the animal that you are perceptive enough to take into account its highly developed sensory mechanism. You must reinforce this feeling with enough time to make the animal comfortable with your presence. This element varies greatly depending upon the species of the animal, the age, and the individual characteristics of the specific animal with which you are dealing. I have found that individual traits vary a great deal even with siblings still together. For instance, I recently found that a mother raccoon had six kits living underneath my house. I started habituating myself with them when they were about two months old. Due to individual traits, two of the kits would come and eat within one foot of me, while two others would hardly come out of their hole while I was present. The other two were comfortable about four feet from me.

Once the animal has developed sufficient trust to approach you, respect must be developed quickly, unless you have a fondness for bleeding and open wounds. Fear and apprehension on the part of a wild animal, once removed, can lead to a total disregard of any being they don’t respect. Depending on the species, and whether it is a predator or not, lack of respect can lead to the animal looking at a human as food, a potential source of danger or competition, or a fun toy to toss around and tear up by any means necessary.

I find it is extremely difficult to set forth a given set of guidelines that would apply to all members of any given species. When working with any wild animal, I react to what I feel that specific animal is thinking and what its apprehensions are. I NEVER use any discipline, relying on establishing a bond of trust and mutual respect based upon what makes the given animal comfortable with my presence to begin with, then progressing to the extent comfortable for the animal to whatever level of affection and interaction desired by the animal based upon incremental steps utilized over long periods of time at each interaction, and then upon incremental steps taken over days, weeks, and months.

Also, I do not use food rewards in my interaction. I rely exclusively on emotional enrichment and the desire on the part of the animal to have a human from whom the animal derives a feeling of comfort and security. I have nothing against using food as a training aid, but I find it much more rewarding to have a more pure relationship that is not based upon any reward other than emotions. I do occasionally hand feed our baby cheetahs and baby tigers. It is done just for additional bonding, and I do also occasionally sit with an adult tiger or other cat while he/she is eating in their house, just to keep them company. I never have had any possessive/aggressive action on the part of the cat as a result of doing so. It’s just another way I reassure the animal I am trustworthy and will not bother anything of theirs.

There is an element of controversy, particularly among caregivers such as sanctuaries and rehabilitators, as to the wisdom and propriety of even having unprotected contact with humans. Like many issues, the answer lies shrouded in a complex response based upon the motivation, training, and ability of whoever seeks to have such contact. Negative contacts that only create anxiety, agitation, and irritation are not appropriate and serve no useful purpose for the animal. In many instances, where the proper personnel with proper training and motivation are not available, it is probably correct to limit or restrict unprotected contact with any wild animal. Where, however, the personnel are available that have all the elements necessary to insure positive, comforting, and reassuring contact with the animal, great benefit can be derived on the part of a wild animal from such contact.

Wild animals are just as apprehensive and unsure of their safety around humans as are humans around wild animals. Wild animals that haven’t had positive and rewarding contact with a human look upon the fence separating them just as much as a safety barrier for them as do humans. Therefore, they can become upset, agitated, and anxious when humans get too close to their protective barrier.

However, the more contact the animals have with a human without a barrier between them that leaves the animal with a sense of comfort and security regarding the human, the less the animal will react with apprehension when other humans get near the fence. If, in addition, an affectionate relationship develops between a wild animal and a human caregiver, the result can be that it becomes much less stressful for the animal to see humans near their habitat and close to their fence.

In addition to the benefit to the emotional well-being of the animal derived from appropriate unprotected contact, there are a number of other benefits: ability to perform simple medical procedures without sedation, ability to discover illness or injuries easily without sedation, safety for keepers due to conditioning that gives a margin of safety if an unexpected escape occurs, and the ability to move animals without the need for sedation or stress.

Again, it must be stressed that it is better to have no unprotected contact rather than to have such contact by inexperienced or improperly motivated humans. Only humans that really understand the emotional needs of the animal and how to properly develop a bond based on trust, mutual respect, and understanding of the animal’s needs should have such contact. There is a great need for more organized training regimes and more programs from experienced behaviorists/trainers for facilities that want to embark on such enrichment for the benefit of their animals.

Each animal—even within a given species—is a unique individual that needs individual understanding. The current conventional thinking that a species has a given set of characteristics, and that certain procedures and methods would be appropriate to apply to all members of that species, must be rejected in order to have a truly meaningful relationship with a given wild animal.

My experience is that the higher forms of mammals, and particularly the predators, have all the emotions possessed by humans. The main characteristic present in humans that is not present in a wild animal is inhibition. Therefore, you will quickly know what an animal is thinking in an unprotected environment, as it will be translated into action, either positive or negative from the standpoint of the human. While these concepts will undoubtedly be looked upon by some as anthropomorphic and therefore subject to question, I dislike that word as assuming humans are the sole possessors of various emotions and feelings and therefore their presence should be discounted in any other species. I know, from my years of experience, that attitude is not only extremely arrogant, it is wrong. If one approaches a wild animal with the attitude that it is entitled to respect for its feelings, emotions, and apprehensions, one will have a much better chance of establishing a meaningful and mutually rewarding relationship and continuing positive experiences with the animals.