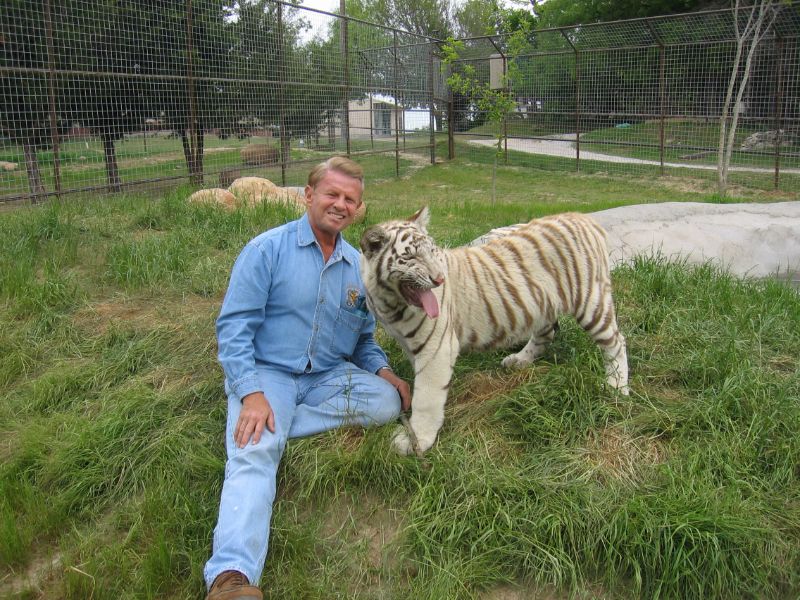 In summation, well-planned and well-executed interaction between human and animal can be a constructive and positive activity for a variety of reasons. Not the least of which is that hopefully future generations will grow to accept that all higher beings on this planet are entitled to some rights and concerns for their emotional needs and rights. Half a century ago humans were guilty of classing other humans in a subordinate classification and treating them as something to be separated and treated differently. Our state of enlightenment in the 21st Century can hardly realize how that activity came to be and was accepted for so long. Perhaps better understanding and knowledge of wild animals—particularly wild predators—will allow humans to recognize that the animals’ emotional makeup is more similar than different from ours, and the gap we now think exists between us is more a result of lack of verbal communication than it is substantial differences. Only dedicated individuals embarking on a lifelong journey to learn about the animals on their terms and with respect for their instincts and needs can bring that recognition about. Necessarily, it will take interaction and understanding to achieve those results. Mistakes will be made. People will be injured. Has any achievement—including the struggle to establish equal treatment of all humans—taken place without those very same sacrifices?

Definition of a Pet

First, let’s define pet. Different people have different versions of what a pet means to them. So, let’s go to the dictionary. “Pet” is defined as “an animal that is domesticated and kept as a companion.”  (Emphasis added.) Now, let’s define “domesticated.” It is defined as “to tame for human use.” A domesticated animal has gone through 10,000 years of selective breeding to breed into them inhibition—which an exotic cat doesn’t possess—and to minimize their wild instincts. Even with that selective breeding, the wild instincts are present. For example, packs of stray dogs in rural areas that aren’t controlled by humans are more vicious and aggressive than a pack of wolves. Okay, with that out of the way, let’s see how it applies to exotic cats.

An exotic cat is an evolutionary marvel of reactions and instincts, together with a strong will. They can never be tamed in the sense we normally associate with that word. They are strongly affected by any source of stimulation, and it affects their mood and reactions. The degree of their reactions to any stimulus is also much greater than the response we would consider appropriate by our standards. These factors are crucial to understanding what must be known in order to safely be in contact with these beings on a regular basis. If one attempts to control the cat’s actions, and the cat considers you a source of agitation at a time when it is already excited, nervous, or already agitated, the cat may well attack or strike out at you. The fact that you raised it will not matter. Sound like it can be domesticated?

There are times when any cat, no matter how much it likes you, will impulsively strike at you if you do the wrong thing at the wrong time. They have no inhibition; what they feel at the moment is what they will do. They don’t turn, as conventional thinking dictates, but they will strike at a perceived source of irritation or agitation when in a certain state of mind. Perhaps one hour later, one could have done exactly the same thing that caused the strike with complete safety. One’s safety lies in rehearsing positive encounters and mutually satisfactory interactions and avoiding or minimizing any negative or irritating encounters. Now, that is often not enough. For instance, when a female comes in heat, it may become vicious towards any human (including you), even if it is normally the most docile of exotic cats. I have personally seen this happen. Sound like the kind of companion you want?

Now, what must one do if they hope to have any sort of relationship with an exotic cat? For one thing, it extremely important that one is totally tuned to a cat when they are in proximity to the cat. One’s safety and the quality of one’s relationship depends on one accurately reading the cat’s eyes, how it walks, the speed of its movements, its sounds, the movements of its tail, the position of its head, how it approaches them, and how the cat responds to one’s presence at that moment. Remember that these cats have all the emotions we have, but they don’t have any inhibitions. What they feel like doing is what they’ll do. If one misreads any element of their subtle signals as enumerated (plus many more too subtle to be easily stated), the cat will ultimately not be comfortable and will not want contact with you. Sound like your definition of a pet? Or a companion?

Also, be aware that children are always in peril, as the instincts of an exotic cat are always to lock on and stalk the smaller of any species. And with the added element of jerky and sudden movements often associated with children, any contact between the two is a recipe for disaster, as many recent anecdotes attest. There have been several children killed by exotic cats recently here in Texas alone.

But, one might say with some accuracy, haven’t I seen many cases of very affectionate interaction between trainers or behaviorists and exotic cats, including on the web site of International Exotic Animal Sanctuary? The answer is “yes,” with a great many caveats. First, the affectionate and loving interaction witnessed is not easily attained. It is the result of a long period of positive interaction between a trained and quite knowledgeable professional, with many days of positive reinforcement. One can do things right for 100 days, and if one then creates tension or agitation for only a couple of days in a row the bond might well be seriously breached. There is absolutely no margin for safety; one must accurately read and respond correctly 100% of the time. Also, the author of this article has met and known most of the contemporary recognized experts and even individuals considered legends in handling exotic cats. They all bear a number of scars (including the author) attesting to the fact that experience does not come without consequences. Is this what one would expect or want from a pet?

In reality, the exotic cats bear no relationship to what is commonly called a pet. I would define a pet as an animal that can be taught to reasonably adapt itself to the domestic life of a human and be safely considered part of the human’s household and environment. In the very best of circumstances, the relationship with an exotic cat can be similar to that one might have with a good friend, where many compromises are made and both parties have to adapt to each other’s habits and personalities. However, unlike the relationship one might have with a good friend, there is always the potential for the cat to strike out and harm even a human with whom it has a very affectionate and close bond. One of the most common mistakes made by humans interacting with exotic cats is to impose themselves on the cat. One must always let the cat become comfortable with one’s presence and let the cat dictate how much tactile interaction it wants to have at that moment or that day. Is that normally the concept one would entertain about how they would want to cohabit with what they would call a pet? For the great majority of people, I would think the answer would be “NO!”

Now, to the more mundane—but vitally important—areas of housing and feeding. We at the International Exotic Animal Sanctuary feel that big exotic cats, such as lions and tigers, should have a minimum of 4,500 square feet of living space to give them the quality of life to which they are entitled. Tigers and jaguars also require a pool for swimming and cooling. We find that building an appropriate habitat for such a cat costs around $30,000. This is actual cost. We have our own welder on staff and employees to do the work, so this doesn’t include any contractor’s fee or other expenses. In addition, a cat this size eats around 11 pounds of meat a day, which also must be supplemented with a variety of vitamins and minerals to give them the balanced diet required for their system.

So, while looking at that cute little cub one might see on a television show or at a zoo, before thinking, “Gee, I’d like to own something like that,” think long and hard. They stay a cub for a very short time. Then, all the problems enumerated above—plus a large number I didn’t complicate this article with—come into play. If one really has a deep and abiding interest in learning about big cats and developing a relationship with one, my suggestion is to volunteer at a facility like ours. I sincerely believe one will find it much more satisfying to be a part of something that directly improves the lives of worthy exotic cats, rather than creating another problem that has to be solved by some sanctuary. Our volunteers are dedicated and committed, and they know they have a vital part in the improvement of our resident cats’ quality of life. Many of them have been assisting us for many years. They feel fulfilled, and the cats’ lives are better for their presence.