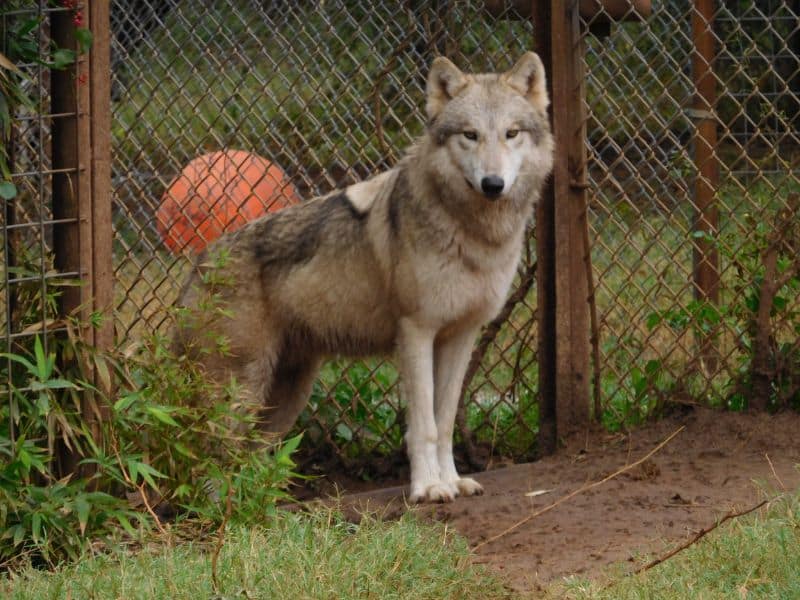 Wolves are among the most misunderstood of wild predators. They are not at all aggressive towards humans. There is not one substantiated case in North America of a wild wolf ever attacking a human. Wolves are very social, with tight bonds between members of their pack. Other females in a pack will often tend to cubs while the mother goes hunting. Members of a wolf pack will show great affection towards one another.

I was blessed for thirteen years to share time and space with a Canadian timber wolf named Cleo. She died September 28, 2002. She was a kind and gentle companion. I got her when she was 5 weeks old and raised her much as an adult wolf would raise a pup. She was never asked to do anything other than be a wolf. I never attempted to train her in any way in the normal meaning of the word. Yet, she would do so many things to please me and conform to my lifestyle that I was constantly amazed at her sensitivity and desire to accommodate me.

We would lie down watching television for hours, her body next to mine and her loving amber eyes watching me for assurance that she wasn’t doing anything to upset me. Although a wolf’s bite is a bone-crushing 1500 pounds per square inch, twice that of a German shepherd for instance, she was so gentle with me that I can’t recall her ever breaking my skin when she was playfully mouthing me.

While I would never allow young children to be in proximity to any wild animal, Cleo was quite safe to be in the company of friends of mine, under careful supervision. If she didn’t feel comfortable around a stranger–which happened about half the time–she would simply stay a reasonable distance from that person. Wolves are actually rather shy animals, always preferring to avoid a conflict.

A wolf’s intelligence level is quite a bit higher than that of a dog. Once Cleo met someone that she liked, that person could come to my house years later and Cleo would remember them immediately, rushing up and putting her paws on their shoulders and showering them with licks. While I frequently had to tell friends that mouth-licking is how members of a wolf pack greet one another, needless to say some of my friends never quite wanted to become that much like a wolf.

Cleo had a playmate when she first arrived; a very large male German shepherd named Caesar. Caesar became very ill about four years later and had to stay in my bedroom for several months until he ultimately died. Before taking him for burial, I brought Cleo up to see him one last time. She sniffed him, looked at him, then sat back and commenced to make long, soulful howls unlike anything I have heard from her before or since that day.

To read more about Cleo, see the Memorial Page

There are three species of wolves in the world: the gray wolf (Canis lupus), the red wolf (Canis rufus) and the Ethiopian (or Abyssinian) wolf, (Canis simensis). Some researchers believe the Ethiopian wolf is not a wolf, but actually a jackal.

The gray wolf, Canis lupus, lives in the northern latitudes around the world. There are five subspecies of the gray wolf in North America and seven to 12 in Eurasia.

All living wolves are considered a single species, with the exception of the red wolf of southeastern Texas and southern Louisiana. The gray wolf is the largest of the wild dog family. There are 32 recognized subspecies of gray wolf. They get up to about 175 pounds, and the most common color is grizzled gray.

Subspecies are often difficult to distinguish from one another. This is because they interbreed where their ranges overlap so that their populations tend to blend together rather than form distinctive boundaries. The different traits we see in subspecies are likely the result of geographic range, available habitat, and prey base. Skull dimensions, overall size, fur color, and the length of appendages are some of the characteristics that differ between subspecies of gray wolf.

Members form strong social bonds that promote internal cohesion. Order is maintained by a dominance hierarchy. When two wolves meet, each shows its relationship to the other by indicating dominance or submission through facial expression and posture. Other modes of wolf communication that we know are howling, other vocalizations, and scent marking. One of the functions of howling is to communicate position or assemble the pack; advertisement of territory to neighboring wolves is another. Scent marking is done by depositing urine or feces on objects along travel routes, particularly at the edge of the packs’ territory. This appears to functions as territory boundary marking and intrapack communication. Usually only the highest ranking male and female within a pack will breed. Other female members of the pack act as aunts, frequently caring for the pups throughout their childhood.

Wolves usually live in packs which consist of the adult parents, referred to as the alpha pair, and their offspring of perhaps the last 2 or 3 years. The adult parents are usually unrelated and other unrelated wolves may sometimes join the pack.

Pack size is highly variable because of birth of pups, dispersal, and mortality. Generally, a gray wolf pack has from six to eight wolves, but in Alaska and northwestern Canada some packs have over 30 members.

Red wolf packs are generally smaller than gray wolf packs and usually have 2 to 8 members, but a pack of 12 is known in the wild.

The gestation period of gray and red wolves is usually around 63 days.

A pack normally has only one litter of pups each spring, but in areas of high prey abundance, more than one female will give birth in each pack. The average litter size for gray and red wolves is 4 to 6, but several may die if natural prey is not readily available.

Adult female gray wolves in northern Minnesota weigh between 50 and 85 pounds, and adult males between 70 and 110 pounds. Gray wolves are larger in the northwestern United States, Canada, and Alaska where adult males weigh 85 to 115 pounds and occasionally reach 130 pounds.

Adult gray and red wolves have 42 teeth, while adult humans have 32.

Gray wolves can survive on about 2 1/2 pounds of food per wolf per day, but they require about 5 pounds per wolf per day to reproduce successfully. The most a gray wolf can eat in one sitting is about 22.5 pounds.

Red wolves eat an average of 5 pounds of food per day, but have been known to eat up to 12 pounds in one sitting.

In Minnesota, wolves kill the average equivalent of 15 to 20 adult-sized deer per wolf per year. Given the 1997-98 estimate of 2,450 wolves in Minnesota, that would equal about 36,750 to 49,000 deer killed by wolves. In comparison, from 1995-1999 hunters killed between 32,300 to 78,200 deer each year in Minnesota’s wolf range. In addition, several thousand deer are killed during collisions with vehicles each year.

The natural causes of wolf mortality are primarily starvation, which kills mostly pups, and death from other wolves because of territory fights. While not usually a big problem, disease such as mange and canine parvovirus can be a concern in small and recovering populations. Injuries caused by prey results in some deaths. Human-caused mortality including legal, illegal, and accidental causes, can be high in some populations. Pup mortality rates are highly variable, but approximately 40 to 60% of wolf pups die each year.

Wolves will travel for long distances by trotting at about five miles per hour. They can run at speeds of 25 to 35 miles per hour for short bursts while chasing prey.

Wolves may travel 10 to 30 miles each day in search of food. Dispersing wolves, those leaving packs in search of their own mate, have been known to travel distances of 550 miles away form their home territory.